I am enjoying the creation process for my gladiator game and much progress has been made.

It has now reached the status of playable, which is very exciting. I’ve done the first build of the game and sent it to some friends. Players can see the gladiator’s stats (soon to be history.) Battle logs are printed out.  UI is becoming resolution independent. The major change was under the hood. Revamped the battle system to be more scale-able, allow for skills and choice.

Eyeing up the competition. 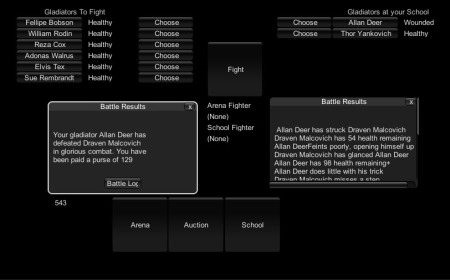 As for the prior decision between Ancient Rome and cyberpunk, I have decided on cyberpunk. I spent my adolescent years with Gibson, and Sterling. Running through the Redmond Barrens and the discussing the role of man and machine speaks well to me.

Balancing is now the name of the game. Some fights end in a single blow, others go on for days of inept posturing.  I want to get a more consistent pace. Then increase skill list, and implement gear.  It’ll be a while, but I’m loving every minute.